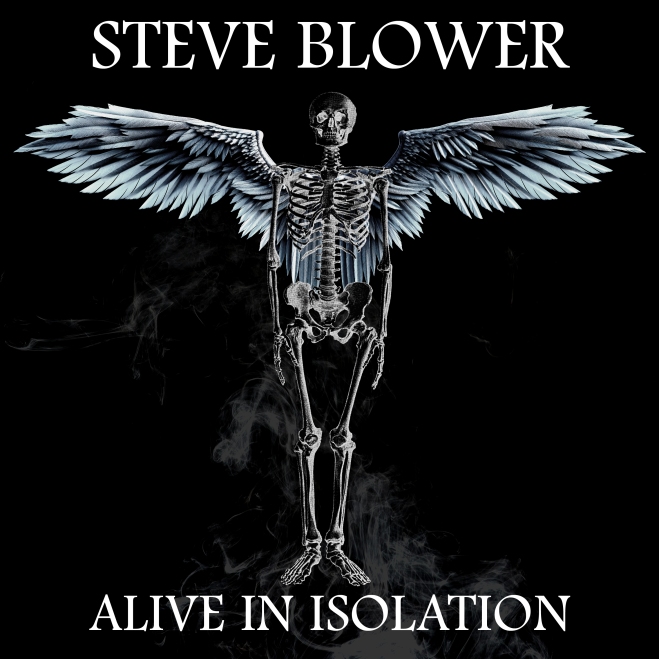 ‘Alive In Isolation’ is Steve Blower’s debut sessions album. A 10 track, with a simulated live atmosphere, it was released by public demand. Following ‘The Prophecy’ and ‘Back In Hell’, ‘AII’ is a departure from previous material, though it does feature some of Steve’s back catalogue, including 3 Hamerex tracks. (‘Mortuary’, ‘The Night Of Samhain’ and ‘In My Eyes’). ‘AII’ was purposely recorded in a manner befitting the live atmosphere for which it aims.

All tracks composed, performed, mixed and mastered by Steve. Artwork also by Steve. Additional composition credits to Chris Moules (The Night Of Samhain) and Elliott Fleet (In My Eyes).

‘AII’ is now available globally, via Bandcamp and other online platforms.

The Whisperer – Similar percussive intro, with slightly more riffage. Again, its greatest strength is its rhythm. A little more tuneful, vocally, though still a way to go. It has to be said, the expression’s still as enthusiastic. There’s some amount of instrumental strength, but it needs a bit more melodic variation. In saying that, there’s a notable Dickinson-esque vocal edge achieved.

Mortuary – Riffs opening, in a looser structure, inter-playing with tighter arrangements. Again, that same vocal flatness, but it’s a little more melodic, this time. The riffage is the best feature here. Liking the obvious enjoyment of that evil laugh, though).

Haunting Misery – Another light percussion intro, followed by some slightly Maiden-esque riffs. An easier, softer structure to this. A bit better vocally. Hitting the notes more skilfully. A tad more riff alternation, too. Experimenting with a more complex section, lightening it up, a bit. More of an assured manner to the accompaniments. Good riff outro.

The Prophet – Again, opening with the cymbals, but now, adding spaced out drum hits, relaxed riffs and a casual melody. Same vocal flatness, in places, but it’s more accurate, generally. The bass lines are what underpins it all here. Heightened riffs, here and there, amongst the dark majority. Vocals growing stronger, towards the end.

Out Of This World – Same cymbal intro, but this time, adding a Celtic edge to the riffage, lifting the track, a bit. Here, the riffs are the central theme, working well for the track’s style and structure. As a pure instrumental, this showcases the best aspects of the band. Definitely a more confident sound.

The Night Of Samhain – Sinister fretwork intro’s, with a morbid, darkened sense. Like a warning of impending doom. Very morose, but well arranged. Vocals entering later. A fitting Halloween track. The vocals suddenly seem more at home, here. This is possibly the strongest track yet. Clear direction. A more compressed imprint to this. Drums only audible from the mid-section and then returning to a softer sound. Vocals also move down, into a gentler tone, at that point, before the now heavier drumming bridges the second half. Louder vocals now, but going slightly off key again, there. Definitely enthused. Just needs a bit of work on the tonal and pitch range. Slightly too abrupt ending.

Ties That Bind – Slower pace intro’s, with clearly more intricate riffing. Moving down, into a low-key, with similar vocals, showing that flat tendency again. It’s still got rhythm and darkness going for it and some of the power screams are more defined. Once again, the riffs are the strongest feature.

The World Is Ablaze – Opening with a fast-paced drum roll and a fairly Priest-esque vocal refrain and riff section. Echoing ‘Judas Is Rising’. Good pace, well conveyed. The melody works best in here. It does feel a little hurriedly thrown together, but it’s entertaining enough.

In My Eyes – Guitar break intro, joined by a rhythmic drum roll. Good pace and laid-back structure. Dipping down, into a deeper key, then alternating with a higher pitch. Slightly eerie sense to the riffs, in places, but a decent attempt at varying the structure. Definitely more melody needed in the vocals. Little bit of overkill in the sinister vocal keys and it skids to an end.

Overall – It’s fair to say that as an ‘as live’ production, ‘AII’ covers that well. It’s just a little bit too rough, though and could do with a large dose of polish. Riff wise, it’s strong, if a tad too reliant on awkward, gothic keys. While the vocals are always enthused, they share a similar tendency to over-reliance on tricky pitches, driving them to sound frequently flat and off key. However, taking the strength of the passion behind them and the strong riff structures and adding some tonal variations, there’s much potential for improvement.