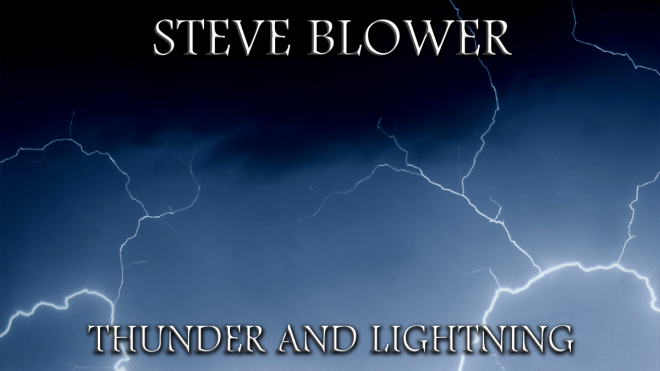 ‘Thunder and Lightning’ is Steve’s third solo release. Steve is a UK independent artist who some may know from the band Hamerex.

Immediately, the drums, those toms have a profound effect, the balls start shaking and your ears react during the opener and title track. Those who know this artists work, will know, there is a strong Iron Maiden influence and vision, the title track seems to seek inspiration from ‘The Wicker Man’. When I mentioned the drums, the over sound is very fresh. Obviously there has been some hard work in this department and the production is a total game changer. The guitars are vibrant, the bass is clearly audible without being muddy and there is a much improved organic sound to the drums. In short, the production has been nailed.

’Mummy’s Tomb’ has a powerful rhythmic stance, it’s a mid-paced gallop and via a similar delivery, ‘Egyptian King’ provides, albeit slight faster. The twin guitar tracking augments the sound of this track more so. A song like ‘From the Grave’ to me has a more US metal mode about it, prior to the “number of the beast” mode being shifted into gear as the track develops. The barrage from the floor toms adds so much depth, shame it’s an instrumental actually, but excellent none the less. The character of said track changes after around the 3 minute mark, this reminds me of earlier Dianno era influences, classic maiden licks made individual. ‘The Seas and the Skies’ has a wonderful galloping bass sound as it kicks into gear furthermore when the guitars surface in the track during the verse.

Personally, I have listened to Steve’s music for a large amount of years, this EP I can confidently say is the best produced thus far. The sound is near perfectly captured and I am so pleased the final missing piece in the puzzle has been found. Make no illusion, there is Maiden influence’s a-plenty, but that great isn’t it, at least it’s not copycat. I actually find this more enjoyable than about 3 of the most recent Maiden albums. Steve should be very proud of what has been achieved here. Hard work pays off and with the way the scene is in the UK, it’s challenging but thoroughly rewarding when it works. Following countless hours of self-promotion, ignoring some major media pay to review approaches and zero label support, I would encourage you to support real underground artists like this. ‘Thunder and Lightning’ is as metal as British metal gets, take a punt, buy the release and support the artist.